There is a DAT (Digital Audio Tape, copy of the studio master) circulating with these 10 tracks (not sure if this is the actual running order), no pics yet known however. Though it is also commonly referred to as Reel Time Sessions II, it was actually the third time (in Fall 1989, recorded in 1 day) the Smashing Pumpkins were hiring this studio. The first period was in late 1988 to record Sun, Dahlia (appearing on Light Into Dark) and East. The second period is described in another entry on this site called “Reel Time Sessions Electric”.

We have decided to call this “release” Reel Time Sessions Acoustic, as the other Reel Time Studios DAT contains the electric tracks, that were recorded in an ongoing process of recording in Summer 1989. Just to give this DAT a timeframe we have set it to October 1989, which is maybe wrong. At the moment we are also unsure if this is a separate DAT from the electric sessions DAT, or that all the Reel Time Studios tracks were together on 1 DAT.

“NOTE: This session was booked to record live-only favorites such as Razor and I Am My End. Unfortunately Jimmy didn’t show up and, since the studio time was prepaid, it morphed into an acoustic session. This was noted as a sloppy session with many false starts. D’Arcy was present but did not perform.”

Most tracks are not fully played, there is much joking around, there are many breaks and lots of banter is going on. Some say the recording went like this:

There is 1 fully played track of interest for the fans: I Am One Part II, which is a follow up to I Am One. None of the tracks of this DAT have been released elsewhere (except for Vanilla, which appeared on Mashed Potatoes), however they have all leaked on the internet and are rather widely available.

The pic of a DAT below is taken from Wikipedia and is only shown for reference. It is not the actual tape! 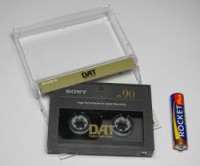