Found on eBay, October 2012. Info from the seller:

ON THE EDGE – With… Siouxsie & The Banshees / Smashing Pumpkins

Here’s an interesting piece I picked up years ago. This is a tape reel featuring a live radio show that was apparently syndicated to stations. It features live sets from both Siouxsie and the Pumpkins. No indication as to the actual performance dates, but the broadcast date is from January 1992. See the photo for the set lists.

This comes in a box designed for a tape reel, with a cue sheet taped to the front. The box shows some wear and is starting to split in a couple of places, but feels generally sturdy and intact. The cue sheet is in fine shape, with a tiny bit of tearing near the top left tape. All this should be visible in the photo.

As for the tape itself, I’ve never listened to it. I’m not entirely sure what kind of tape reel it is, or what you’d need to play it, but it appears to be in fine shape. I can make no claims as to how it sounds though.

Regardless, this is definitely a rare piece for the Pumpkins/Siouxsie collector.” 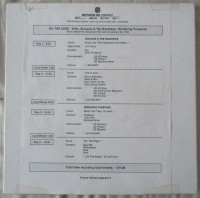 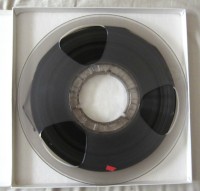