Collecting to the Extreme, Episode 6

This episode in the ‘Collecting to the Extreme’ series, as well as the two upcoming episodes, is all about very rare Smashing Pumpkins CDs pressed in very limited numbers.  Or, in the case of the combined Gish album releases from the 1990s, to be discussed later, they represent parts of rare CD collections from around the world.  We included this set of Gish CDs as an example of Extreme Collecting, since such a complete set of Gish CD releases is very hard to match for any serious Smashing Pumpkins collector.

But prior to that, let’s kick this episode off with a one-of-a-kind test pressing, previously owned by Billy Corgan. 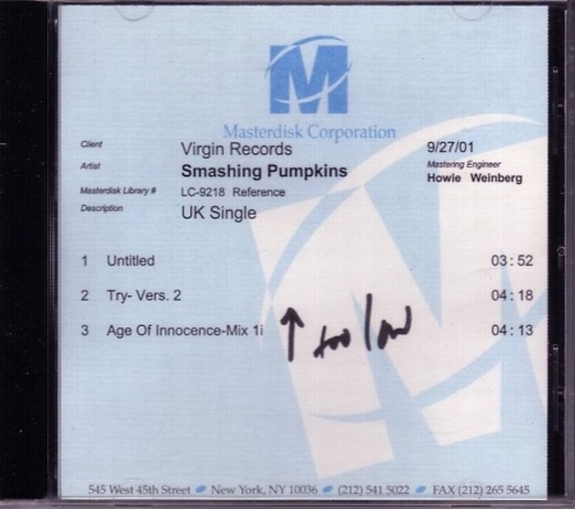 A few episodes ago we introduced a test pressing CD set for the Mellon Collie and the Infinite Sadness album that once was in Billy Corgan’s hands.  With the one-of-a-kind Masterdisk Corporation test pressing for the European CD single of “Untitled” (pictured above), we can actually prove that it was in Billy’s hands; his handwriting is clearly visible.

The song “Untitled”, written by band leader Billy Corgan, was the final recording and release made by the band before their break-up in the year 2000.  “Untitled” was recorded in Chicago in late November by Corgan and the remaining original members of the group, guitarist James Iha and drummer Jimmy Chamberlin.  Touring bassist Melissa Auf Der Maur, who replaced original bassist D’Arcy Wretzky, did not play on the song.  Bass duties were handled by Corgan as can be seen in one of the two videos for the song.(1)

Dave Richards, the programme director at Chicago-based radio station Q101, said that a few days prior to the Smashing Pumpkins’ (penultimate) show at Chicago’s United Center on November 29, 2000, Billy Corgan called him to discuss plans to simulcast the concert.  Corgan asked Richards to see him in the Chicago Recording Company studios, and, in Richards’s own words, “I went down to the studio, and [Corgan] said, ‘I have something I want to play for you.’ I had no idea they were working on new songs. He played it for me, and I asked if it was from one of the album sessions, and he said, ‘No, we just finished it yesterday.’ ”  Corgan sent over a master of the song two days later, and Q101 debuted it on air just before the United Center show.

Another master of the song was send to Virgin Records, where a promotional in-house pressing was manufactured, dated one day prior to its radio debut.  It was addressed to ‘Ashley’.  It is our (really wild) guess that ‘Ashley’ may in fact have been Ashley Newton, then-executive, and later Co-President of Virgin Records America , and Senior VP of A&R at Virgin Music Group Worldwide.  In 2003, Ashley Newton was hired as Executive Vice President of A&R at RCA Records, by Clive Davis, the newly installed chairman of RCA Music Group.  Whether ownership of this CD can be added to his CV of impressive feats is still supposition on our part, but, well, it would undoubtedly represent one of the highlights of his career.

“Untitled” was aired by Q101 DJ James VanOsdol, and Corgan told him during the radio show that it was a “sort of special see-ya-later song”.  VanOsdol started his career back in 1993 at Chicago radio station Q101 (aka WKQX-FM), where he spent a total of 11 (non-sequential) years.  A rather obsessive music fan, VanOsdol became known for supporting local and independent music, primarily on the Q101 specialty show “Local 101.”  Throughout his career, his voice was also heard on other Chicago stations such as WXRT, WZZN, WLUP and WTMX.  After the debut of “Untitled”, Corgan and the rest of the Smashing Pumpkins played to the audience at the United Center in Chicago.

Citing an unknown, anonymous source : “The track follows the patented loud-quiet dynamics that were the group’s calling-card on such multi-platinum albums as Mellon Collie and the Infinite Sadness (1995) and the 1993 breakthrough Siamese Dream.  ‘When you’re young / you can promise / anything that you wanted / to be in love, to feel love all around’ Corgan sings in a hurried, joyful flow.  As it fades out, “Untitled” crashes to earth with what looked at that moment, in all likelihood, to be the final screaming Pumpkins guitar solo from Corgan.”

Corgan stated that “Untitled” intentionally sounds more like the earlier Pumpkins of Gish and Siamese Dream, and that they could always produce music that sounded like their older albums, but chose instead to try to push their music in new directions.  Corgan later commented, “The song was our way of saying ‘fuck you’ to all those people who thought we’d somehow lost our minds and weren’t able to return home.  We were in the studio for what appeared to be the last time, so it was very emotional; we had only three days.”

[youtube=http://www.youtube.com/watch?v=f51D02g9fpg]
A few days later, in December 2000, Q101 shipped out three copies of the “Untitled” single that were given to them by Billy Corgan.  The Q101 version of the single featured the artwork of the Greatest Hits album, which was not-yet released at that time.  One of these three copies was able to be won in a competition run by Q101 on the James Van Osdol radio show, where contestants had to correctly answer a question about the Smashing Pumpkins.  This version of the “Untitled” release almost deserved a spot in this series, but since the aforementioned ‘Untitled Ashley Acetate’ and of course this test pressing are even more rare, we decided they were where the focus belonged.

After debuting the track on November 29, 2000, Q101 later streamed “Untitled” exclusively on the station’s site for a month.  The posting of the song on the website was in keeping with the band’s web-centric final days.  After that, according to a spokesperson for the band, more than 50 stations in the United States played the song – which was not commercially available at the time.

An official Europe-only CD single was issued on November 5, 2001 by Virgin Records, pressed in both the UK and in The Netherlands.  The single, with outtakes from the Machina / The Machines of God sessions as B-sides, accompanied the release of the Smashing Pumpkins’ Greatest Hits album.  Several types of sleeved promos for “Untitled” popped up all over Europe prior to the commercial release.  Examples have appeared in France and in Sweden.  At the same time, in Canada, an extremely rare and highly sought after 7-track promo CD was released in a jewel case, entitled Untitled And Other Choice Cuts.  There is only one known official mix of “Untitled”, known as the “Pop Mix”, which was released on a limited promotional acetate in the US.  However, there is not much difference between the standard mix of “Untitled” and this “Pop Mix”.

And as it goes with all official Smashing Pumpkins releases, at least one test pressing was made that was send to the band/Billy Corgan to be check for quality. This test pressing by the Masterdisk Corporation is dated September 27, 2001 (more than a month before the official release) and Billy noted on that the song “Age Of Innocence – Mix 1i” was “too low”, with an arrow pointing upwards.  Thus far, we do not know what Billy meant by this, as there appears to be no difference with the song that was eventually released on the commercial single.

(1) Wikipedia states: Two music videos for the song were released.  The first was an edited collage of footage of the band from 1988 to 2000, and was only released through television and online content providers in the late summer of 2001.  A second video was released as a secret feature (Easter Egg) on the band’s Greatest Hits Video Collection.  The video simply features footage of the band recording the song at the Chicago Recording Company, the band’s preferred studio.  Stills from this footage were used on the cover of the European single.  The video was directed by Bart Lipton and edited by Mark Imgrund. 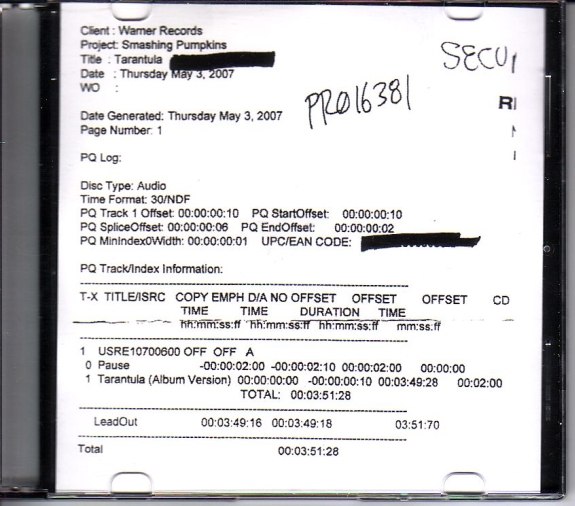 What is noteworthy here, is that Mexico is the country of release, as well as the early date of the pressing.  “Tarantula”, the first single from the Smashing Pumpkins’ Zeitgeist album (the album that marked the band’s return after a hiatus of almost five years), was officially released in early July, 2007.  For the Smashing Pumpkins, it was in fact a follow-up single to “Untitled”, arriving almost 6 years later.

This test pressing of the CD single is dated May 3, 2007, two months before the official release.  However, the CD inside the slimline jewel case is marked May 21, 2007, presumably the date of manufacture.  Since Wikipedia already has a thorough article on “Tarantula”, we would like to direct you there.  Note that May 2007 was indeed the month that the song “Tarantula” became known to the general public.

And what else is there to tell? The handwritten code PRO16381 on the front artwork was the release code used for the UK promo single of “Tarantula”.  Details like these aid in certifying the authenticity of this pressing.  No Por Suerte Studio in Mexico City, Mexico, is known to exist and it has been confirmed that the company partners with Warner Records.  All in all, we have not found any flaws on this pressing to give us reason to doubt its authenticity. So far we have seen only one copy appear on the collector’s market.

Fellow freaks, everyone at SPfreaks would like to wish you an awesome holiday season, and we hope to see you again next week!

Collecting to the Extreme, Episode 10 | The SPfreaks Team

[…] several test pressings (“Tristessa” on vinyl, Mellon Collie and the Infinite Sadness and “Untitled” on CD, among others).  But we also know about a test pressing CD for the Adore album, pictured […]