Revisiting the Live Compilations No 3 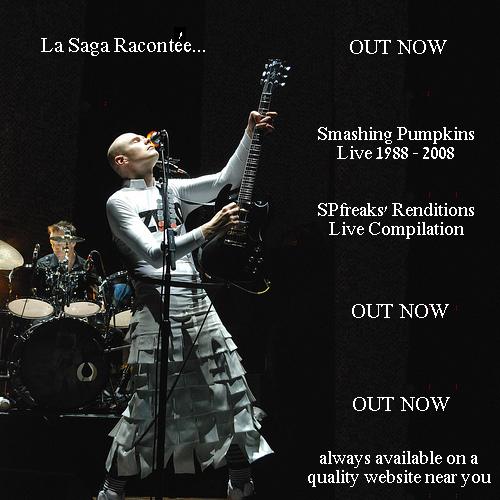 “I don’t have to play by these rules or do these things… I can actually have my own kind of version.” (1)

Between 2008 and 2010, SPfreaks put together 4 compilations of Smashing Pumpkins live songs and made these available as mp3s. In these months we present a run-down of them. #3 was originally posted on 2009.11.28. For all these live compilations, jewelcase artwork has been created. The artwork is included in the downloads.

596.18 MB of Smashing Pumpkins renditions of their own songs are here for your listening pleasure:

Tracklist Part I, the acoustic renditions

Notes on this release. (also included in the artwork as a leaflet)

It’s starting to become a tradition, creating these Smashing Pumpkins Live Compilations… And with pleasure this third one was made, let me tell you. I consider this renditions release as the best so far (and the other 2 were already hard to top!), with a stunning amount of 42 Smashing Pumpkins live tracks that highlight every aspect of Pumpkins playing live. At first I mixed the (semi-) acoustic tracks with the more rocking electric tracks, but that didn’t really create a good listening atmosphere, to my humble opinion. So for that reason, I split up the release in 2 parts. But how did I decide about every one of the 42 tracks? Let me explain about a few of them.

Part I, track 1 is a joke, obviously. The irony of the title “I’ll Never Change” just asked for being the starter of this release…  This rather unknown Smashing Pumpkins song was taken from Mashed Potatoes. “Obscured”, “Snail” and “Suffer” from that London Hotel room session couldn’t be missed when we talk about acoustic renditions of Gish era songs. And when it is hard to decide which one should be added, you just throw them all in, right?

“Cherub Rock” and the other 2 titles from the 1993-12-12 gig were chosen for the integration of a cello in the sound. It works quite well, and I hope you guys listening to it, think the same. “Mellon Collie And The Infinite Sadness” was chosen for it’s rarity, I think not many fans know about the existence of unaired 1995 MTV footage that is out there. It was taken from the David Mead Compilation digital-only boot that can be found sometimes on torrent sites.

Also I wanted to pick some Smashing Pumpkins tracks that were done live with other artists (that can be considered a rendition also, right?), that’s why “Eye”, “Blissed And Gone” and “Disarm” are on the list for Part I. All in all, Part I gives a great overview of the acoustic brilliance that the Smashing Pumpkins achieve playing live. Again, just my humble opinion. But I hope you guys have a great listening experience, and appreciate my choices again so far!

Part II is focused on the electric songs, and I didn’t give a shit throwing in some same titles when I thought it would be appropriate for renditions’ sake. That’s why you will find “X.Y.U.”, “Disarm”, “Starla”, “Today” and “Silverfuck” in 2 redone versions. I wonder who will survive the famous 40 minutes version of that last track…  Oh, talking about “Today”, the electric version is maybe not the best recording quality, but do you notice how old that song actually is? And what about the instrumental middle part? Awesome!

Furthermore, “Sun” in an even longer early live version than on the Light Into Dark release, many Adore era songs since I had the idea that this era was not highlighted enough on the previous two Live Compilations, and may I point you already to the angry grunting metal version of “Ava Adore”? Man, I love that version, it’s perfect! “I Am One” from the 1994-08-28 gig was chosen for the very different rant. Even little parts of an early “Zero” can be heard, and Billy Corgan was definitely not that much into God and cornflakes as he turned out to be later in his career.

And now I want to put a little spotlight on “Pissant”. “Pissant” was released on the Siamese Dream album in Japan only, on the “Cherub Rock” single and on the b-sides album Pisces Iscariot too. Meaning, the song “Pissant” is not that well-known, and it wasn’t played live many times either. Only the few visitors to a handful of gigs had the chance and the pleasure to get to know this song in a live rendition. This 1993-10-05 recording of “Pissant” shows the Pumpkins weirdness during the introduction of Jimmy during the song, and the outtro that I just had to add… And with the blues-rock version of “Window Paine” directly following it, damn, this is good!

Final thingy I want to explain, is the song “X.Y.U.”, why I put it twice on this release. The almost acoustic version is already very rare, and good too, but when the Smashing Pumpkins played as “The Beatles” as opening act for Kiss in the Dodger Stadium, Los Angeles, on 1998-10-31, they decided to redo “X.Y.U.” almost completely. Be prepared for an almost new song! It is one of my favourite Smashing Pumpkins live tracks of all times. The quality is quite decent, since it comes from the Friends And Enemies Of Modern Music (60m cassette). Info found online about this famous demo/boot cassette:

From a 60m cassette given by BC to an online fan in April 2000, with instructions to “circulate these”. The compilation was originally to be a 90m tape, but it got screwed up, so he dug up the Gravity demos instead, and made this 60m tape the next day. Two tracks were cut, on the end of each side… “Well, tough shit.”

I’m sure this Renditions Live Compilation is no “tough shit” but “extremely enjoyable shit”. Have fun!

(1) the quote is again noted down from Billy Corgan’s mouth.

Does anyone have the full acoustic show with a cello ? Please contact me if so thanks !!

You can find it here: http://www.youtube.com/watch?v=X3HTjUz1OpQ

This is hard to find now. But the others who sell have it. And they say peeps who share are bad.