Smashing Pumpkins in The Netherlands: Tight and Balanced 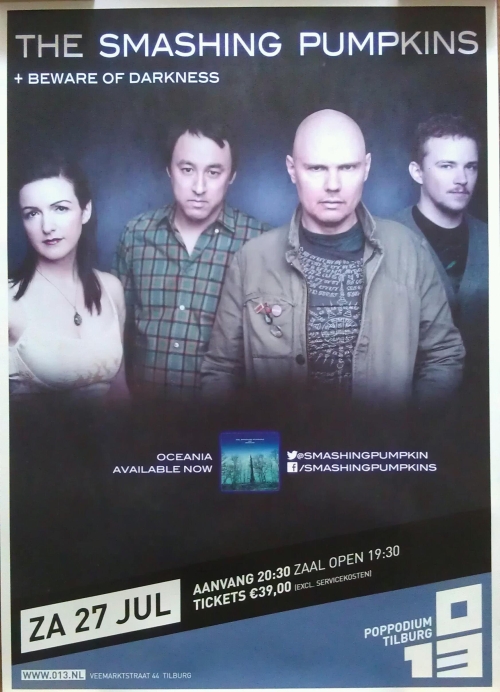 ‘She likes surprises,’ Soundgarden lead singer Chris Cornell sings on their hit album Superunknown. Well, I do not know who ‘she’ is, but I do know that I like surprises too. That’s why I was so happy to read that Billy promised us some unexpected things on their Shamrocks and Shenanigans tour. What would the band have in store for The Netherlands?

It was almost two years ago that the Smashing Pumpkins hit The Netherlands during one of their tours. They then almost sold out the huge Heineken Music Hall in Amsterdam, where they treated the die-hard fans to a lot of obscure tracks and b-sides. Very enjoyable for the fans that own every single version of Zeitgeist, but in a big venue like the HMH, there are a lot of casual fans just looking for some 90’s super hits.

Those fans would have been very happy with the songs Billy, Nicole, Mike and Jeff threw into the audience at the beautiful Paradiso, Amsterdam (in the old days it was used as a church!) and the recently restored and modernized 013, Tilburg venues. Where Corgan refused to play a ‘greatest hits show’ in 2011, the nights at these places were packed with alternative rock classics; “Bullet With Butterfly Wings”, “Today”, “Zero”, “Ava Adore”, “Rocket”, “X.Y.U.” and “Tonight, Tonight”, just to name a few. But Smashing Pumpkins never aimed to be a nostalgia act. There was a lot of room for more recent material too. A hard rocking version of “Starz” was definitely a highlight, but also the Oceania album tracks were greeted with much enthusiasm from the crowd. An acoustic rendition of “The Celestials” even had people singing along to this tune. A great and well deserved compliment for the ‘new’ band.

Billy the Gardener
About halfway into the set at Paradiso, Amsterdam, Billy started to chat with the audience, exclaiming that he was getting ‘as they say in America, long in the tooth. That’s called old.’ He laughed about stopping to tour and focus on gardening. People laughed, but after Billy said that he wasn’t joking, some crowd members clearly felt a bit uncomfortable. Is he really planning on quitting rock ‘n’ roll style touring?

The banter was quickly forgotten when Billy was invited to eat Dutch pancakes with a girl in the audience, so Corgan could only reach for his Mellotron to roll into one of the highlights of the night. ‘If there is a God, I know he likes to rock…’. The die-hard fans in the audience couldn’t believe their ears. “If There Is A God” hadn’t been played live for over 12 years! Yet here we are, listening to Billy and Nicole singing without a doubt one of the best songs off the (so far) internet-only album Machina II / Friends And Enemies Of Modern Music. The cheering from the crowd spoke for itself: this really was a surprise, just as Billy had promised. And a very pleasant surprise indeed.

Stadium settings in Amsterdam
At Paradiso, Amsterdam, the band continued to rock through some monumental hits before treating the audience to another track not played in a long time: “The Imploding Voice” from 2000 record Machina / The Machines of God. At this point, the bad thing about the concert really started to show; the sound was way too loud and mixed in an unbalanced way. It was almost like the sound engineer used the settings for a stadium! Because I was in the front row, I had a lot of direct sound coming from the band’s amps and monitors. The voice amplifiers were behind me, so the vocals got drowned in the mix more than once. After the show I heard (as far as I was still able to hear) that the sound wasn’t that good on the balcony either, so it wasn’t just because I stood completely in front of the stage. The people at the mixing desk obviously had an off night, as it would appear. 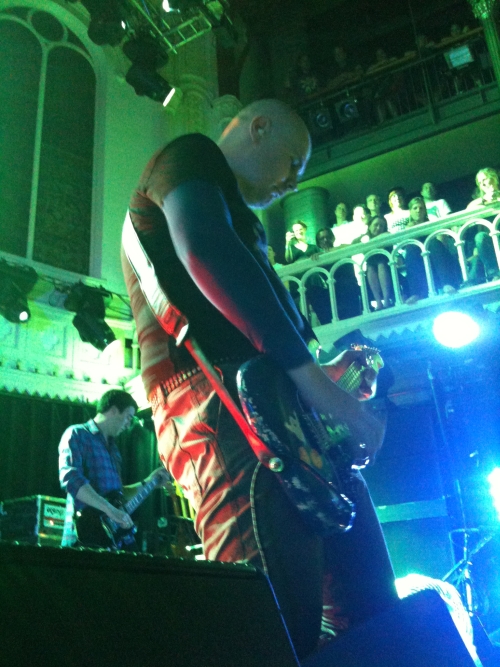 The Pumpkins can’t be blamed for this though, because they gave all they could. Jeff showed once again that he knows his guitar’s neck even better than the back of his hand.  Nicole stole the hearts of many with her sweet backing vocals and rocking bass skills.  Mike hit his toms and cymbals like they had to be destroyed at the end of the show, and Billy did justice to the print on his t-shirt: ‘Je suis un rockstar’. The band was really tight and professional, never missing a beat.

After spoiling us with two encores at Paradiso, Amsterdam, which included pumping versions of “Immigrant Song” and “Cherub Rock”, the band left the stage for the last time, leaving behind an extremely satisfied crowd. The sound problems were the only thing that kept this awesome show in Amsterdam from being really, really awesome. And we are not alone with our very positive review: Dutch music magazine Oor (Ear) created a raving review too on this Amsterdam show, to be found here (warning: Dutch language, but beautiful pics!).

Another show and a second SPfreaks meet-up in Tilburg
Luckily, for the band and the fans alike, the band got another chance one day later. With buzzing ears, sore throats and tired legs from the night before, we headed down south in The Netherlands to the city of Tilburg for another night of fuzzy rock and oceanic tones. This night was not only a Smashing Pumpkins show, but also another SPfreaks members meeting. Quite a few SPfreakies showed up again, one even driving all the way from Germany to see the band play! It was cool to get together to see our favorite band for another time. 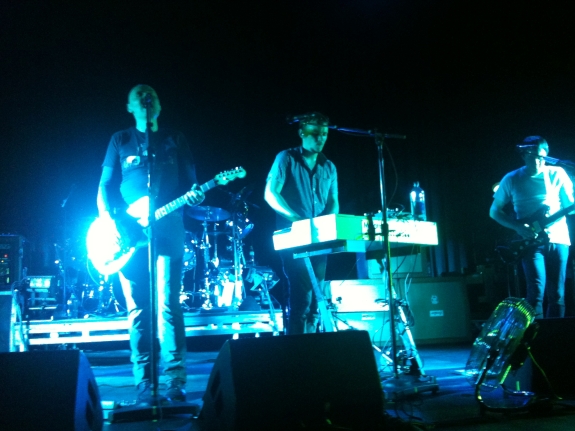 The summer heat outside had found its way into the venue. The audience was hot before a single note was played, so warm-up act Beware of Darkness didn’t have to do much. During their opening act, we did notice the sound was a lot better than in Paradiso, even in the front row. Nice! Now we could finally hear the band sing properly!

The Pumpkins cranked out almost all the songs they played the night before, but they changed the order up a bit. Due to time constraints, a few songs like “Immigrant Song” were skipped. And starting with “Tonite Reprise” leading into “Tonight, Tonight” was a smart move. What a way to open a show!

The improvement in sound was clearly noticeable, which made the show even more enjoyable. However, it was noticeable the audience was a little more stiff than in Amsterdam. It was plain to see that a somewhat bigger venue brings a wider and more critical crowd. However, all time classics such as “Bullet With Butterfly Wings” and “Zero” got even the most difficult visitor to jump.

Billy didn’t say anything about last night’s banter anymore, so I think we can conclude that he was joking when he said they wouldn’t be touring anymore. And walking back to the train station with rain falling down and lightning illuminating the sky, I realized we should hope they were joking. The Smashing Pumpkins showed once again that they are so much more than a revived 90’s band. This band is still moving forward. Sometimes stumbling, sometimes incomprehensible, but always fascinating. I don’t know where the band is headed to next, but I do know I’ll be glad to follow them wherever they go. 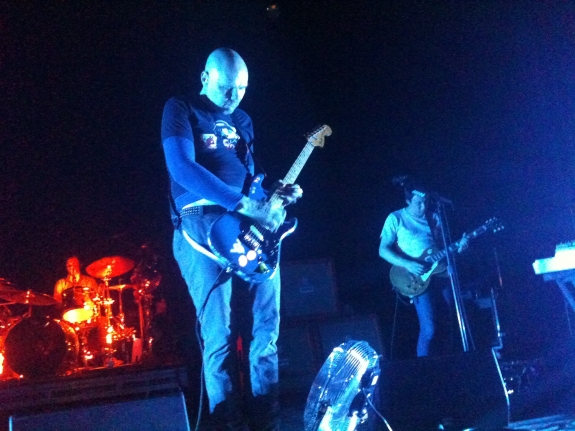 Encore 1:
The Celestials (acoustic)
Porcelina of the Vast Oceans

Encore 2:
Immigrant Song [Led Zeppelin]
Cherub Rock
(1979 was on the setlist for this encore, but was not played)

Encore:
The Celestials (acoustic)
Porcelina of the Vast Oceans

Great review, Jeroen! Can’t agree more, it were two great gigs! X.Y.U. in Amsterdam gave me the goosebumps. I have seen videos on Youtube where our group of SPfreaks can be seen jumping around and having fun first row at the stage lol! And it was awesome to see so many friends again. 🙂