Article and images by Geo Folkers 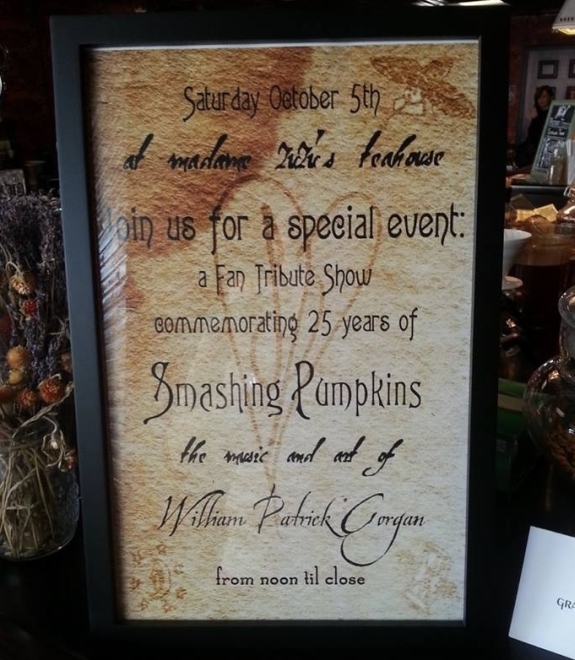 When Billy Corgan announced a few weeks ago that no official celebration was planned for the 25th Anniversary of Smashing Pumpkins playing live gigs, there was one fan of the band called Matt Sams that felt like ‘this ain’t gonna happen!’.

And when Saturday, October 5th, 2013, marked the spot as being the exact date 25 years after the Smashing Pumpkins took the stage as the first four-piece line up at the Metro, Chicago (IL) in 1988, a plan was born in Matt’s head. And when it all came together last weekend, Madame ZuZu’s Teashop in Highland Park (IL), was the ultimate place to be for a Smashing Pumpkins Fan Event never seen before in the bands’ fandom history. 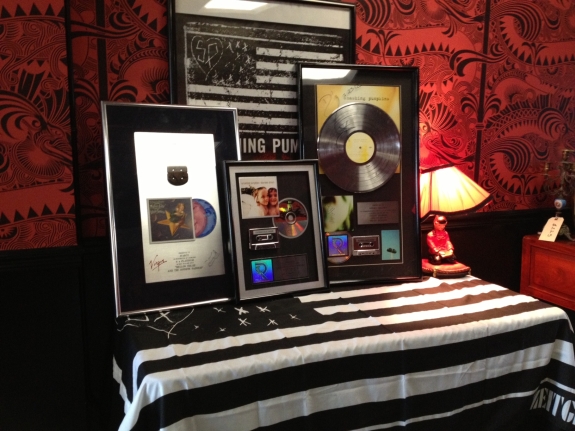 It all started when Matt posted his ideas on the Forum of the Smashing Pumpkins website, and soon other fans applauded at the idea of organizing a Fan Event in Chicago (IL). Madama ZuZu’s, the Corgan-owned teahouse, was hired, artists were approached for playing live music, poetry reading and trivia games were planned, Smashing Pumpkins inspired art was supposed to be created, SPfreaks members were contributing parts of their memorabilia collections for a rare-Smashing-Pumpkins-items-exhibition, an anniversary cake was organized, and more. Online flyers for the fan event were made and spread around, and when even the Smashing Pumpkins used their highly anticipated social media outlets like Facebook and Twitter to highlight this fan-organized event, there was nothing standing in the way anymore of a remarkable and joyful day for the fans of our favorite band. 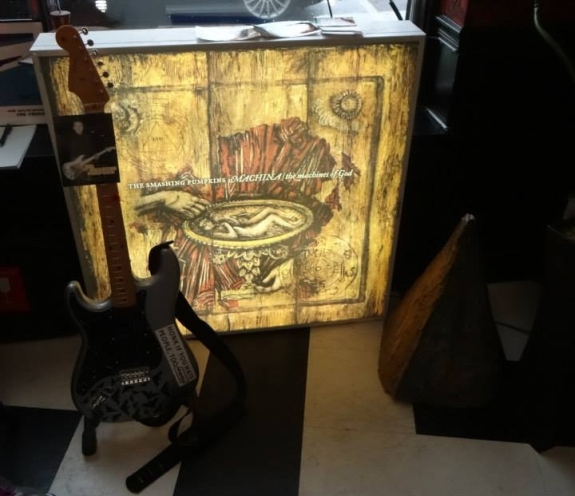 And it all happened as planned. Live music was played in several sessions during the day by Matt Sams himself, who performed “El Sol”, “Eye”, “Lily (My One And Only)”, “Soma” and “To Sheila”, and by Greg Bates(*), who performed “1979”. Together Greg and Matt performed “Today” and “Cherub Rock”, and both artists had the audience singing along to those longtime Smashing Pumpkins fan favorites. 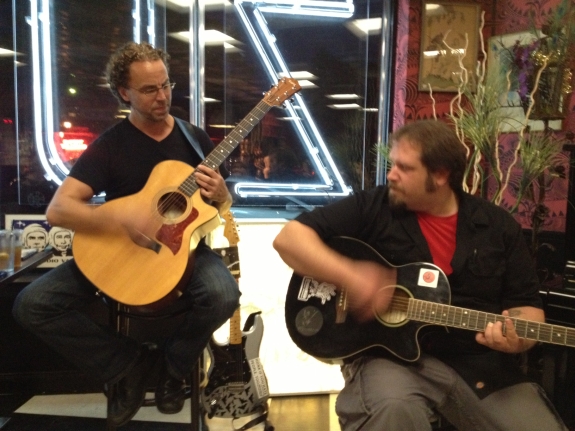 Between the acoustic gigs by Greg and Matt, another Smashing Pumpkins fan, Joy Goscinski, versed multiple Blinking with Fists poems. Then, the trivia games were a lot of fun with many laughs. Crayons, colored pencils, and paper were left out on the tables in Madame ZuZu’s Teahouse for coloring Smashing Pumpkins inspired art. And at some point, ZuZu’s even contributed an anniversary cake by surprise! Meanwhile, Matt Sams, being the organizer and host of the event, did a great job on keeping things moving. 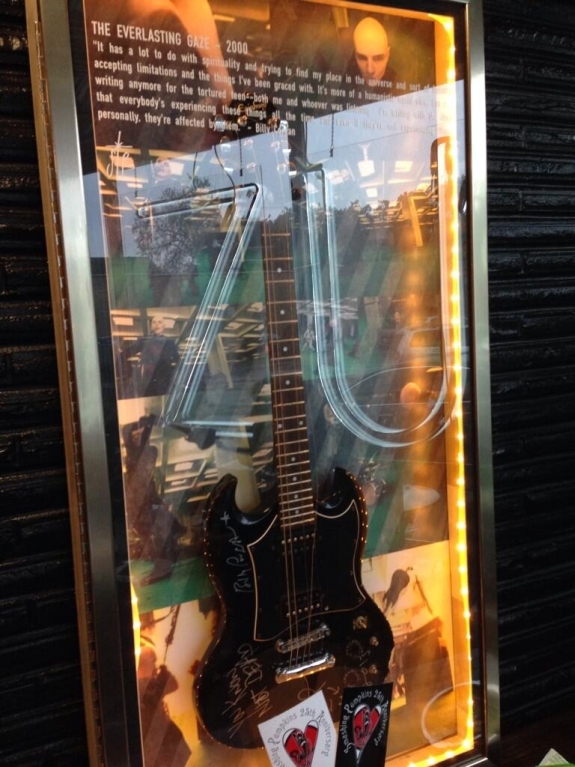 As said, SPfreaks had a grand opportunity to set up and show some really rare Smashing Pumpkins memorabilia that showcased the musical history of the band. These memorabilia included one of the original props from the Grammy awarded “Tonight, Tonight” music video (a moon), and several fans took the one-of-kind opportunity to have themselves being photographed with the life-size video prop. Also on exhibit was Billy Corgan’s “Everlasting Gaze” music video guitar, a fan-made replica “bat strat” guitar, rare vinyl and demo tapes from the early days of Smashing Pumpkins, tour posters, a huge collection of career-defining CDs of the band, and several Gold and Platinum sales awards that the band had earned while building their musical legacy. 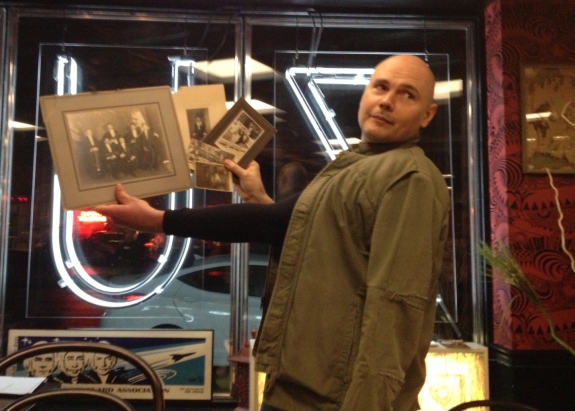 Billy Corgan on Mellon Collie And The Infinite Sadness

Then, at around 8:30 PM, a ‘surprise’ visit from Mr. Billy Corgan himself came next! He brought with him an original “Zero” shirt, one of the Gish album guitars, a set of antique photos that had inspired him during the creation of the monumental Mellon Collie And The Infinite Sadness album, and the original artwork of the Machina / The Machines Of God album. He shared these artifacts with the gathered fans with joy, and surrounded the items with many personal stories and great musical visions. Next to this, he brought ten prizes that he personally gave away to some lucky fans during another trivia round with-a-twist. Who had thought that we were allowed to ask Billy Corgan questions about his musical career, and then, when he didn’t know the exact answer, he would give a prize to the person who brought in the question. One of the questions to Billy, for example, was how many live performances the Smashing Pumpkins had done since 1988 to date. Since Billy didn’t know the answer precisely (being a little over 1,250), he gave away a copy of the Adore vinyl! 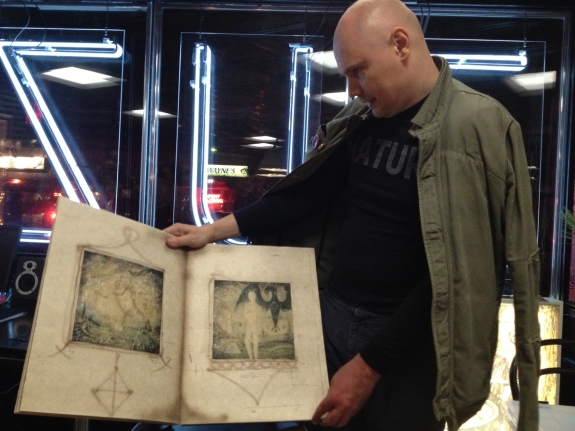 Billy Corgan on Machina / The Machines Of God

Matt Sams, who performed some Smashing Pumpkins songs while Billy Corgan was watching, would later declare: “It was kinda nerve-wracking to perform SP covers in front of Billy… I was afraid he was gonna come up to me and say: Wrong chord… nope… wrong again… YOU’RE RUINING MY SONG!!! lol”. However, that didn’t happen, and at the end of the night, fans left in great spirits, joining for photographs with Billy and his guitar, meanwhile holding the original “Zero” shirt that he had brought, and sharing many stories of how the art and music of Smashing Pumpkins had affected so many lives. 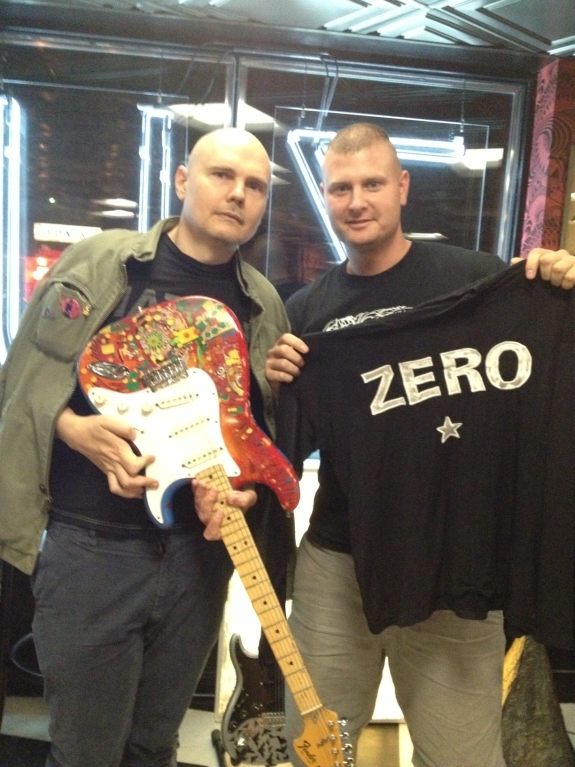 We would like to close this article with a big thank you to Matt Sams for bringing this fan event to life. Another thank you goes to Madame ZuZu’s Teahouse for hosting this event, and welcoming all visitors during the day. And thank you to the performers, being Greg Bates, Matt Sams, and Joy Goscinski. Also thanks to Linda Dodge, for all her help, and several fan outlets “out there” for contributing prizes to the trivia games.

And last but certainly not least, a big thank you also goes to Mr. Billy Corgan for taking the time to attend this fan event, meanwhile sharing so many personal anecdotes that were unknown to the fans so far. It was the icing on the cake of a really great day, a day that was highly anticipated on social media worldwide, and a day that many must have felt sorry to have missed in person!

Please enjoy some more pics of the event: 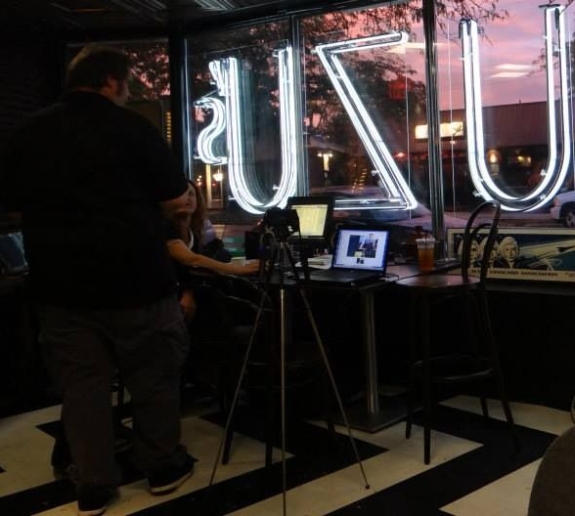 The Media Corner at ZuZu’s 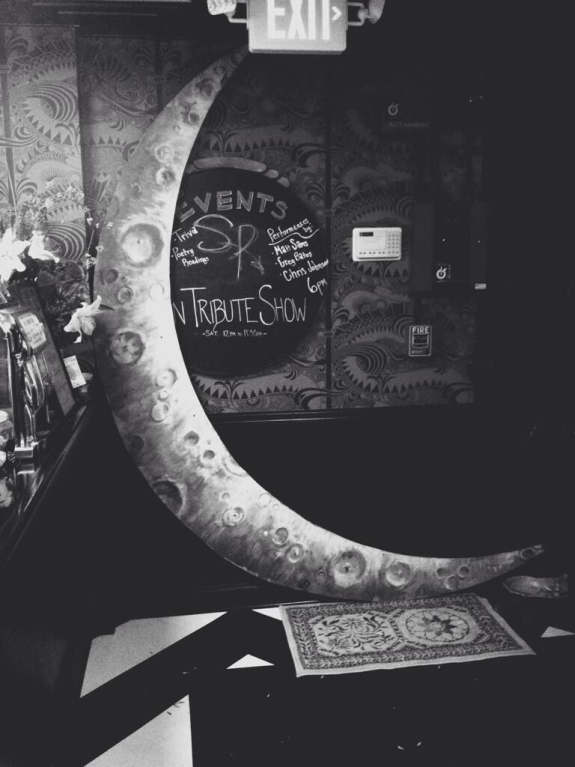 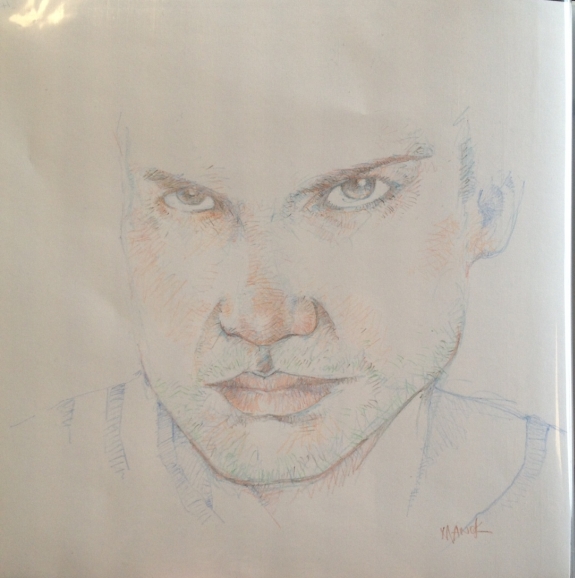 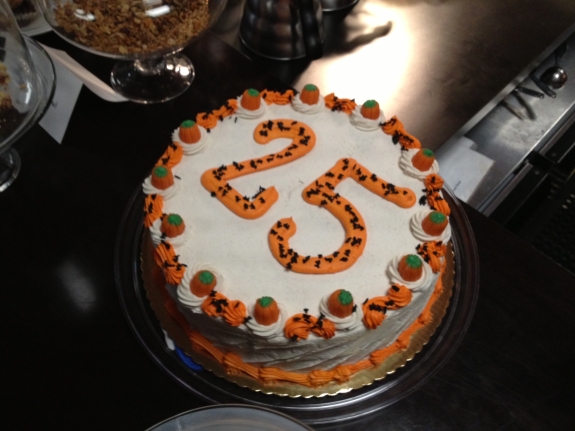 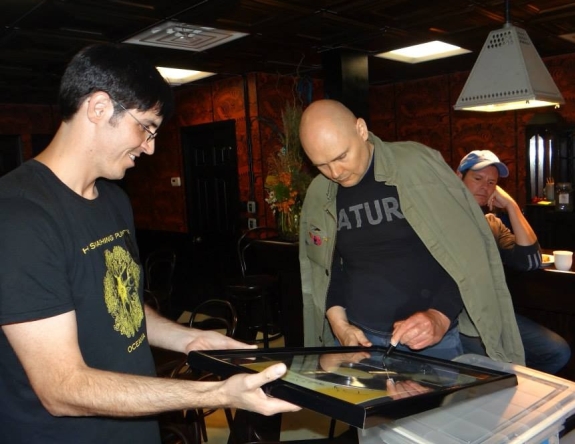 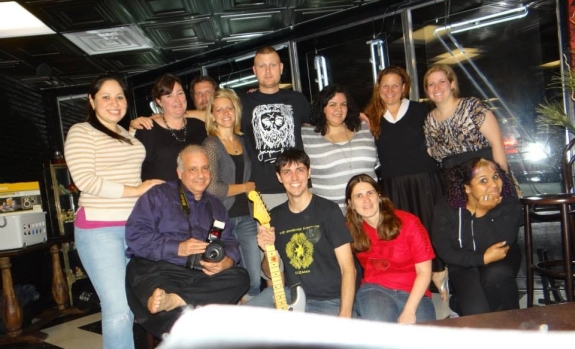 The guys having a good time!