Was Smashing Pumpkins Founded in 1988? 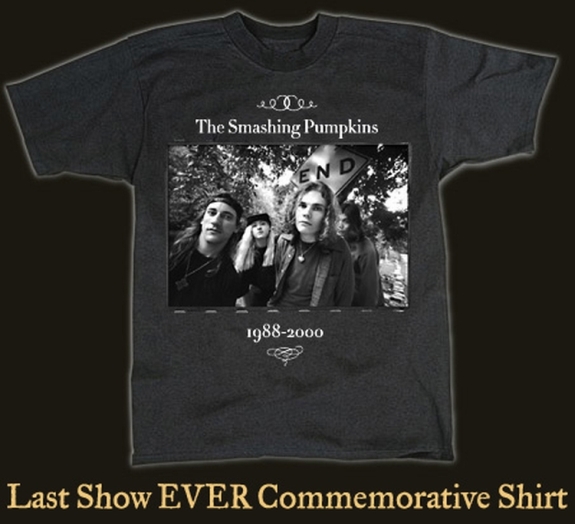 Both online and offline 1988 is considered to be the starting year of Smashing Pumpkins. And yes, the band consisted as a somewhat stable four-piece after hiring Jimmy Chamberlin to take over the drum kit in that year. Jimmy played with the band live for the first time at the Cabaret Metro (back then, Joe Shanahan’s own Metro, Chicago was still referenced this way) on October the 5th. And they even played a few live gigs earlier in 1988, starting with the Chicago 21 venue on July 9 and the Avalon venue on August 10. These locations also reside in Chicago. Those first two Smashing Pumpkins gigs were performed with a drum machine. Furthermore, they had their first (attempt of a) demo tape out in 1988, where Ronald (Ron) Roesing was credited for swinging the sticks. Ron was also playing drums, together with Billy Corgan writing, singing and playing the guitar, in a band called ‘The Marked’ in the 1985-1987 era. For every fan of the band Smashing Pumpkins this is rather common knowledge. But was the band really founded in 1988?

Before we answer that question, let’s have a look around on the internet first. What does the band say about the root year, what does Wikipedia say about it? Shouldn’t at least Wikipedia be well informed, and present us validated information? And what do the fan sites mention in their Smashing Pumpkins band biographies? Here is a summary:

Just have a look at the picture on top of this article again. After the band went into a 5 year hiatus in 2000, the shirt shown could be ordered online on the band’s personal website. We clearly recognize the artwork of the Greatest Hits album (released November 2001), with the time frame 1988 – 2000 stated on the shirt.

Billy Corgan on the other hand, mentioned 1987 as the founding year of the Smashing Pumpkins on stage a few times over the years. The most recent occasion was during the Oceania Cruise Record Release Party on June 12, 2012*. He also hints to 1987 when blogging on LiveJournal.com about ‘The Smashing Pumpkins Archive Project’ on June 7th , 2011, when he mentions a demo that was created in that same year:

“The SP archive project, for which we don’t yet have an official nom de plume, is now fully underway. People are being hired, wired, and fired up with this insane pile of stuff to go through. The main focus of our tape transfers is to take any materials from 1985-1994 that are relevant to the Gish, Siamese Dream, or Pisces Iscariot albums and get them into a stable, 96k format. This makes it easier for me to instantly jut around and hear what we have. It is a surreal experience to listen to a demo from 1987 and have no memory of ever recording it, but knowing from the chords and the style that is indeed you that is playing!”

* Billy Corgan mentioned 1987 as the year Smashing Pumpkins played their first live show. However, it should have been 1988 (Chicago 21, Chicago on July 9th).

But these words of Billy Corgan are hardly picked up by the official media. Or are they?

The Wikipedia page about Billy Corgan states “William Patrick ’Billy‘ Corgan, Jr. (born March 17, 1967) is an American musician, producer, and occasional poet best known as the frontman and sole permanent member of The Smashing Pumpkins. Formed by Corgan and guitarist James Iha in Chicago, Illinois, in 1987, the band quickly gained steam with the addition of bassist D’arcy Wretzky and drummer Jimmy Chamberlin.”

Chronology section, about the year 1987: “Billy befriended a Japanese-American, James Iha. James had grown up in a suburban environment where he ’learned to deal early on with being a minority, being called names.’ He had average grades in high school, attended a junior college where he received high grades, and continued his education with a Graphic Arts major at Loyola University. He also took courses in theology, psychology, and ’all these other things that didn’t relate to art. But it was good.’ He later dropped out to spend time working with the band. Their similar influences and interests caused both of them to collaborate and form a band. James was playing with a band called Snake Train for the first few months with the Pumpkins.”

And about the year 1988: “The Smashing Pumpkins begin to take shape, as guitarist Billy Corgan meets D’arcy Wretzky in a confrontation, and gives her his number.”

On the Omnipedia – Timeline page: “1987 – Billy’s friend introduces him to a young guitarist named James Iha and the first form of the Smashing Pumpkins is created. They start ’writing little goth-pop songs‘. They are kind of a new wave band at this point, their drummer-the good old drum machine. James was in a band called Snake Train at that time. 1988 – July 9th – The Pumpkins have their first gig ever at a Polish Bar in Chicago. Later that year, Billy Corgan met D’arcy Wretzky outside the Chicago Avalon nightclub, according to the Jim Stapleton book; Billy [his] first words to D’arcy were ’You’re full of shit‘ because she liked a band he thought sucked. She had been in a band and was recently in Europe (France). The band they were arguing about was the band she was in, The Dan Reed Network. D’arcy joined the Pumpkins after a visit to Billy’s house; she was impressed by his music.”

Translation: “At the age of 19 he worked in a used record store. It was there that he met James Iha, who, impressed by the quality of Billy’s songs, did not think twice about giving up the band Snake Train. The two founded the band Smashing Pumpkins, who debuted in 1988 at club Chicago 21, and meanwhile they also found a bass player: D’arcy Wretzky.”

In the band history, very first sentence: “The Smashing Pumpkins are an American alternative rock band that formed in Chicago, Illinois in 1988. While the group has gone through several lineup changes, The Smashing Pumpkins consisted of Billy Corgan (vocals/guitar), James Iha (guitar/vocals), D’arcy Wretzky (bass guitar/vocals), and Jimmy Chamberlin (drums/percussion) for most of the band’s recording career.”

And finally, what do we say on SPfreaks.com?

From About the Band – The History Page: “The son of a jazz guitarist, Billy Corgan grew up in a Chicago suburb, leaving home at the age of 19 to move to Florida with his fledgling goth metal band, the Marked. After the band failed down South, he returned to Chicago around 1987, where he began working at a used-record store. At the shop he met James Iha (guitar), a graphic arts student at Loyola University, and the two began collaborating, performing and recording songs with a drum machine.”

Taken from the page ‘The Chicago Band’s Turbulent Career’: “In 1988, Chicago’s clubs were still pumping with the dance innovation that had exploded in the city two years earlier: also known as house music. Meanwhile, at a Polish bar near the center of town, the germ of another sonic revolt was taking shape. In front of a tiny crowd, a lanky, moon-faced guitarist and his ice-cold, American Japanese sidekick were whipping up a maelstrom of freeform jazz-punk noise. Eighteen months later, this embryonic two-man show had evolved into the Smashing Pumpkins, a proto-grunge quartet with two incendiary 7″s to their name, including one on the legendary Sub Pop label.”

And lastly, what do other sites say? Let’s examine one of many examples.

James Iha page: “James Yoshinobu Iha was born March 26, 1968 a 2nd generation Japanese-American. Though Billy Corgan was known as the driving force of the band, Iha has played a vital role in the Pumpkins, co-writing and writing over a dozen songs. In 1987 he began playing guitar with Billy Corgan to form the Smashing Pumpkins.”

After reviewing all known online information, we can see confusion and/or misinformation everywhere. Is it 1988? Is it 1987? Is it even 1986, when Smashing Pumpkins were formed?

Smashing Pumpkins were founded in 1987.

Yes, 1987. We are going to clear this up, now and here, for once and for all. With the help of the picture above of this tape called Gish/Moon, a handmade demo tape by Billy Corgan in the early days of the Smashing Pumpkins. And a few more pictures later in this article.

As stated above, it was 1987 when the name Smashing Pumpkins appeared for the first time, and when the first rehearsals and recordings were done under this moniker. Those practicing jams and recordings were done by James Iha and Billy Corgan and were supported by a drum machine. They lead to at least one Smashing Pumpkins (home) studio recording in 1987, called I Fall. It can be found on the B-side of the Gish/Moon tape and is the penultimate track.

On a sidenote, I Fall was most likely recorded on a Fostex X15 four track cassette recording device which Billy used for recording demos. This device, pictured below on the left, was taken from the Smashing Pumpkins Facebook page. The picture on the right presents a clearer picture from the internet. This device was already in use by Billy Corgan in 1985 for recording and transferring The Marked songs.

What about James Iha’s band, Snake Train? There is a known demo tape in 1988 (pictured below, also to be found here), and James is credited on that tape as playing guitar. The explanation is not that remarkable. Starla.org explains: “James was playing with a band called Snake Train for the first few months with the Pumpkins.”

And finally, how do we know the Smashing Pumpkins song I Fall was recorded in 1987? The current and longtime owner of the Gish/Moon tape asked Billy Corgan himself. His answer, not a direct quote, was: “That recording dates back to late 1987, it was then recorded at my father’s home studio.”.

Let the conclusion be clear:

Smashing Pumpkins was founded in 1987. 25th anniversary this year, anyone?

Hm.. Evidence suggests that ‘Hope’ is from even earlier than that, and that was later released under the SP name. Still, does a 4-track recording that’s likely just Billy himself really count as “the founding of The Smashing Pumpkins”?

Please don’t be offended, but evidence proves, and rumor suggests. You’re welcome to send your findings about ‘Hope’ to TheSPfreaksTeam@gmail.com . ‘I Fall’ from the Smashing Pumpkins’ Gish/Moon tape is a (late) 1987 recording from James Iha, Billy Corgan and a drum machine. In this setting they performed the July 9, 1988 Chicago 21 gig, and nobody doubts that was a Smashing Pumpkins performance.

Collecting to the Extreme, Episode 10 | The SPfreaks Team

[…] reached their 25th Anniversary?  Hmmm…  Maybe neither the band nor its management has read my article about the founding year of Smashing Pumpkins […]