Bob Stern, the creator of the Vinyl Schminyl Radio, sits down with SPfreaks to discuss his history in radio, meeting and speaking with Billy Corgan, and his opinions on vinyl.

When I was a kid I used to go to downtown Chicago to WLS and WCFL to watch the DJs.  I love music and realized that’s what I wanted to do.  I never did any radio in high school, but I did in college.  As a matter of fact, the first college I went to I started a small student-run radio station and then went to the University of Illinois and worked for probably one of the largest student-run radio stations in the country, WPGU.  I ultimately worked in Woodstock, IL, for WXRD, which was at the time a progressive rock station.  I didn’t want to bum around from one small station to another.  So I told myself by the time I’m 25 years old if I don’t get to a better market, then I’m going to go into radio advertising sales.  The day after my 25th birthday, I started in radio sales.  I’ve always had a love for radio and never wanted to get out of it, but I did.  About 10 years later I worked for a local Chicago station, WCBR, called the Bear, and worked part-time there for a year.

I wouldn’t call myself a close friend with Billy because I’m really not.  But here’s how he and I met. Right around the corner there [was] a place called the Ravinia Wine Shop.  A year ago in February, [2012], they had a grand opening with a bunch of local people and the owners are friends of Billy’s.  I mentioned to the owners that I would like to get Billy on the podcast, and he happened to be there that night. That’s where I met him and we talked for quite awhile.  I said I’d like to get you on for an interview.  I didn’t want it to be a Smashing Pumpkins interview; I wanted it to be a classic rock interview.  His knowledge of music is just about as good as anybody’s. 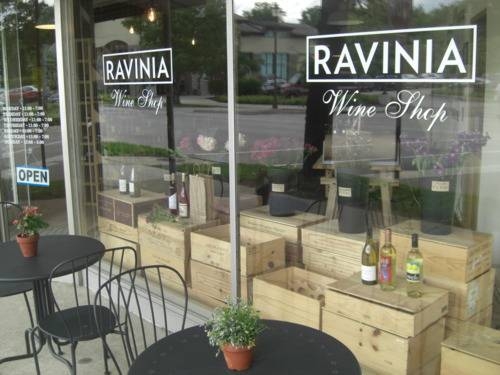 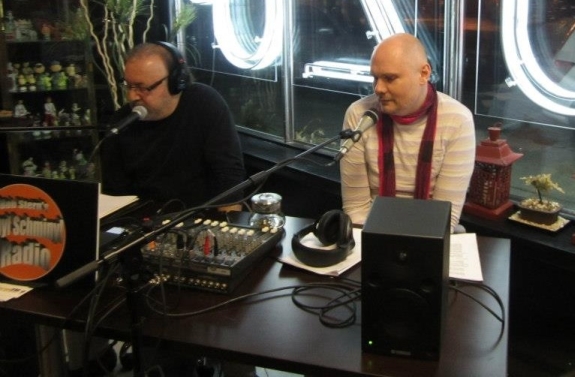 The Led Zeppelin show was recorded Saturday (April 6th, 2013) and we ran it on April 13.    It’s the second time we’ve actually done that.  We did one back in February and featured Pink Floyd for the hour.  Billy, who owns Madame Zuzu’s and invited me to do the podcast, spent the entire evening with us this time and joined us for a few minutes on the air.  It was fun. 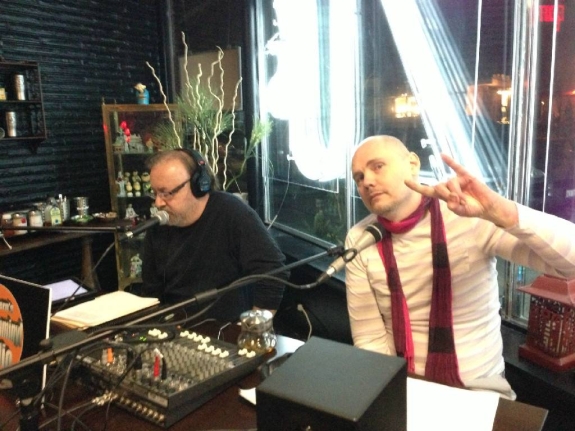 Three years ago (April 26th, 2010), I decided to start Vinyl Schminyl Radio.  The first cut that we played was Harry Nilsson’s “Jump Into The Fire”.  I was thinking of a name for the podcast, and I thought of his Nilsson Schmilsson album. 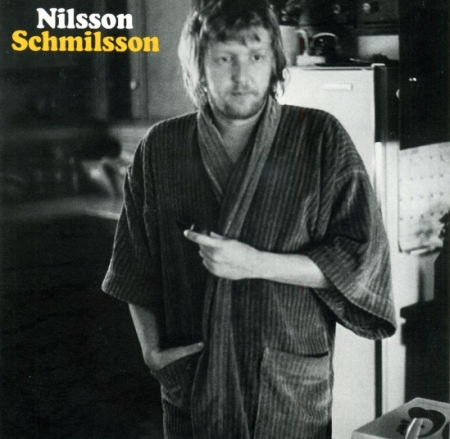 At the beginning, I was digitizing my old vinyl.  I don’t do that as much anymore because I can find the songs on iTunes or similar outlets.  But I did bring a lot of cuts from vinyl in the first year, year and a half, but after that it’s been more digital-based.  I wanted it to be vinyl based, and it was for quite some time, but then it kind of took off and I decided let’s just put the songs out.

Yesterday was our 700th show (April 16th, 2013).  In July 2010, we started the Vinyl Schminyl Radio Hour.  Before that, it was a Monday through Friday thing and we’d feature a song and a back-story.  I did that for the longest time. Now I try to do it every other week, or sometimes two weeks in a row.  If you go to Vinyl Schminyl.com you can see a list of all the Radio Hours I’ve done.  I’ve done over 60 of them. 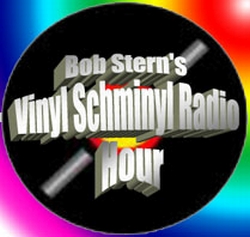 Vinyl is a great format and the jury is still out whether vinyl is better or worse.  I know vinyl is making a resurgence. At the Rock and Roll Hall of Fame there’s a big vinyl section there.  In my interview with Billy last year, we talked about him rereleasing albums on vinyl and the Beatles rereleasing albums on vinyl.  But truth be told, unless they come up with a vinyl iPod it’s going to be mostly digital.  Even CDs are on their way out.  I still have a pretty big CD collection too, but there are some things that are still not available on CD.  That’s when I take a look at my vinyl collection and try to put that out there.  I still use vinyl from time to time, but definitely not as much as when Vinyl Schminyl started.

Is Vinyl Superior in Quality?

Vinyl is probably of superior quality, because if you have a completely clean copy (no scratches) and are listening to it on a really nice turntable and really nice speakers, that’s when the magic happens.  I have a really nice set of speakers.  My turntable isn’t quite as nice, but one of these days maybe I will fork out some big bucks for a nice one.  From time to time, I do enjoy sitting down and listening to a good album.  On the other hand, I like listening to a good CD through a good sound system as well.  I’m not as much of a purist as you would think I am.  It’s about the music and not so much about the technology of what the music sounds like.  But it’s got to sound good.  If it’s a well produced and well mastered album, it will sound good on CD as well as vinyl. There is a difference, but nowadays with iTunes they’re releasing the higher quality MP3s that sound a lot less compressed.

There’s another argument there that you’re certainly losing a lot of information with compression on MP3 vs. the CD file.  So personally, I’d like to listen to CDs rather than MP3s, but on the other hand, I only have a streaming music system, so pretty much everything that comes into our living room is MP3.  If I’m down in my “man cave”, where my studio is, I fire up Pink Floyd’s Dark Side of the Moon in surround sound on my SACD player. That’s an experience in itself.  There are sounds on that album I never even knew existed!

I just acquired an entire case of brand new, unused, unplayed original Mobile Fidelity Lab series vinyl.  I did a whole week of songs just taken from those albums.   Abbey Road, Eagles, Steely Dan.  I still haven’t gotten to everything that’s in there.

Any Album that Must be Enjoyed on Vinyl?

To answer your question, I’m more about a well produced album than I am about the vinyl copy of it.  Now with that said, there are some new pressings of vinyl, for instance, Smashing Pumpkins; Mellon Collie and the Infinite Sadness.  I know what the CD sounds like, but I want to hear what the 180-gram vinyl sounds like as well.  I would love to take a listen and hear the difference.

I like [The Smashing Pumpkins]. I think their material is really cool.  I have learned to appreciate their sound more since I met Billy.  To be honest, I have not heard any vinyl of theirs, but I will tell you Siamese Dream, Mellon Collie and the Infinite Sadness, and even Billy Corgan’s solo album [The Future Embrace] I think are really cool.  They were all really well done albums.  The solo one had mixed reviews, but I think it was tremendous.  There was a cover song on it by the Bee Gees, “To Love Somebody”, which I played on Vinyl Schminyl.  [Billy Corgan] was actually really happy that I did that.  When I told him that we’d be featuring that, he was pretty jazzed.  You never hear that song on the radio! 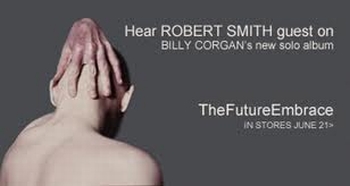 The reason mono was such a big thing, well; let’s take it back to The Beatles.  When The Beatles were in the studio, originally their stuff was only done in one channel.  At that point, everything was coming out of one speaker which generally was a radio or record player.  It didn’t really matter if it was stereo or not.  Most stuff was produced in a mono and a stereo version.  There was stereo back then, but for most people, that would be like the audiophile version.  I even had a stereo back then, but the reason I bought the mono version was because it was anywhere from one to two dollars less.  But if you notice, when they rereleased The Beatles catalogue, they released a mono and a stereo version.  And a lot of people like the mono version because that’s the way they were originally recorded and intended to be listened to.

Any Vinyl You Are Looking For?

There was a band called Fallenrock in 1974.  They had this song called “She’s a Mystery”.  The album was called Watch for Fallenrock.  If I could find that – they have it at Amoeba Music.  Been trying to get my hands on that song and incorporate it into one my shows. I’m probably the only one in America that has a “jones” for that song. 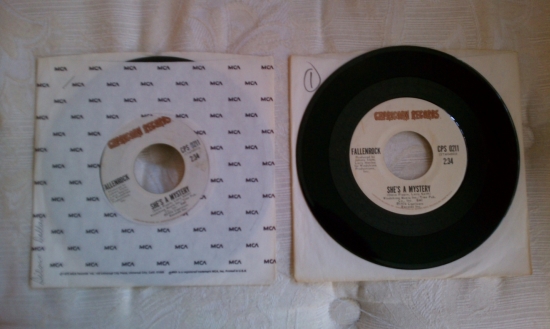 [The album] sounds familiar.  It was a compilation album from 1993, yeah.  I’m looking at the setlist here, and there are pretty cool songs on here.

I watch The Grammy’s every year.  I really like Mumford and Sons.  I like Adele.  I think she’s phenomenal.  I like Train.  I like the Black Eyed Peas. I enjoy Jack White as well.  The Grammy’s, there is so much diversity, there really is. If it sounds good to me, I’ll download it or buy the CD the next day.

Advice on Putting Together a Podcast

Make sure you have something to say.  Just because you can do it, doesn’t mean you should do it.  I’ll say this for musicians too; just because you can play the guitar, doesn’t mean you’re going to be a rock star.  I’ll never discourage anybody from finding common ground and putting their stuff out there, but make it the best that you can make it.  There’s a lot of podcasts out there.  And there’s a lot of, excuse me, crap out there.  The one thing I’m proud of about Vinyl Schminyl is that it offers up good information, it’s done in a professional manner, and the quality of the hosting is pretty good too.  Make sure you have a good product, because if you have a good product then people are going to listen and you will get positive publicity. 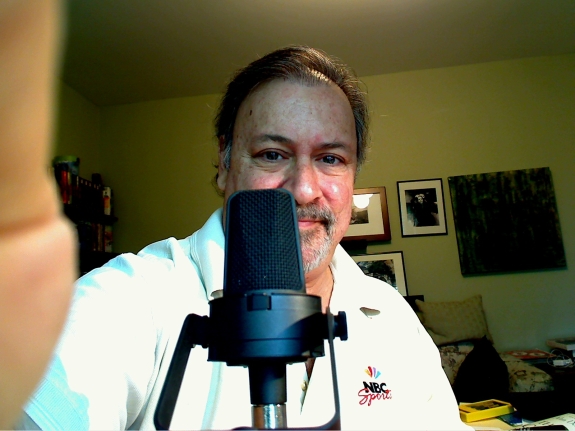 Please note that Bob is celebrating his 3rd anniversary of Vinyl Schminyl Radio today.  Make sure to visit his website to check out his newest podcasts every week!

Great piece Bob. And I love that Fallenrock song also; remember playing it on WVVX when it came out…..and it can be found on ebay!