At the time Billy Corgan released this single from his solo album TheFutureEmbrace, it was a rather unique concept to release it as a DVD. Walking Shade appears in 2 versions, the video (first track) and the audio only version (second track).

The Taiwanese release of the DVD is in NTSC format. 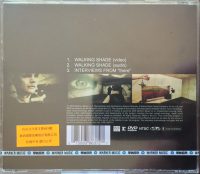