This DVD was a giveaway at the 20th anniversary party of the Metro in Chicago.

The chapter about The Smashing Pumpkins contains an interview with Joe Shanahan, the owner of the Metro, talking about the band, and Quiet, recorded live at the Metro on 1993/08/14. (The total length of the chapter is 4:34.)

From the Office of Richard M. Daley, Mayor, City of Chicago:

WHEREAS, Metro, a centerpiece of Chicago’s Wrigleyville neighborhood, is celebrating its 20th anniversary of offering the latest and finest performances of well-known musicians and musical groups and emerging artists alike; and (edit, SPfreaks)

WHEREAS, on May 21, 2003, Metro will celebrate its twentieth anniversary with a birthday party celebrating its musical past and promising future:

NOW, THEREFORE, I, RICHARD M. DALEY, MAYOR OF THE CITY OF CHICAGO, do hereby proclaim May 21, 2003 to be METRO DAY IN CHICAGO, and urge Chicagoans to recognize the many innovative and vital contributions Metro has made to our city and beyond. 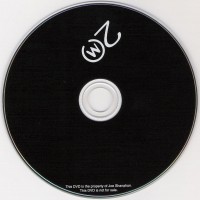