“Self-released tape sold at early shows for $5. J-card has lyrics for “Daydream” and a photocopied picture of the band. The picture is hand-colored with pink magic marker. All spellings of song titles are from the sleeve.

The title “Stars Fallin” is a misprint; the correct title is “Stars Fall In”.

Additional info from inside the sleeve:

extra eternal thanks to the patient mark ignoffo.” 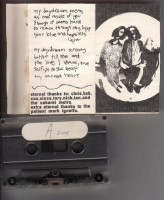