Released in editions of Spin’s July 2007 issue. The CD comes in a clear plastic with no sleeve or artwork. Next to the obvious covers there is 1 track of interest: Signal To Noise, a track the Smashing Pumpkins never released so far. Info from SPFC.org about Signal To Noise:

“Unreleased Zeitgeist-era song given to Matt Walker by Billy to be “covered” by Matt Walker’s The Most Dangerous Race on the SPIN/MySpace Smashing Pumpkins tribute CD.”. 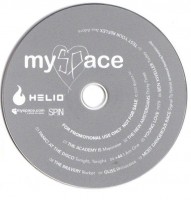