These pictures are from the (maybe) never officially released Nothing Ever Changes tape. But there are also rumours that there are about a few dozen of these tapes around. We set the date for this tape in the Summer of 1988 (July), as Ron Roesing (ex-The Marked, playing drums only on the first 2 tracks) was for sure not playing with the Pumpkins anymore in July 1988. There is much confusion about Ron Roesing’s involvement in the Pumpkins. He is rumoured to have programmed the drummachine at rehearsels, but some known tracks from this period show very low quality drum programming, that we presume it was mostly done by Billy Corgan himself. But at least we are sure that from July 1988 the Pumpkins start playing their first gigs with a drummachine, and without Ron Roesing ever showing up at any show. D’Arcy on bass was around at the 1988/08/10 Avalon show and Jimmy Chaimberlin on drums played his first live gig with the Smashing Pumpkins at the 1988/10/05 Metro show.

The 4 tracks of this tape have leaked in the shown order and with the shown names. Between () is the name of these tracks as Ron Roesing remembers them when being interviewed about them. The recording date(s) for all tracks are uncertain, but we date them at early 1988 (around March). There are also rumours about a 3 track tape and a 60 minutes tape by the same name, see info below.

For reference, on www.SPFC.org it states:

-There were allegedly three versions of artwork for this tape created. The single copy known to exist outside the band’s archive has a cover featuring a nun with bleeding hands and eyes. Artwork mock-ups for the other two covers are known to exist, but a description of the actual art is unavailable.

-The number of these tapes created is unknown, but it is very likely an extremely small number. I would be very surprised if it totaled more than 100 copies across the three cover versions.”

Also for reference, this is the information from The Smashing Pumpkins Recording Sessions Version 3.2 – August 2000 (compiled and maintained by Jesse Miller):

NOTE: An early demo called Nothing Ever Changes. The lineup included: Billy, James, and Ron Roesing (formerly of The Marked) on drums; this could be viewed as the very first recording that ceased to be The Marked and became The Smashing Pumpkins. Heart and Cross were originally two separate songs, but were joined together into one. It Suits Me Well is actually The Vigil. Although a tape exists as the aforementioned 3-song configuration, the original Nothing Ever Changes was about 60 minutes in length and was Billy’s first attempt at a full-length album; it contained a combination of songs, spoken word selections (recalled as “bad poetry”), and instrumentals.” 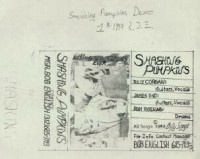