Collapsing Cities. A third stream entitled Glass Towers replaces these later on. The streams encompass the band’s career and include such rarities as “My Eternity” studio and “I Want you to Want me.””

The pic shown is the section at www.smashingpumpkins.com where visitors could listen to the tracks in the jukebox. It’s not available anymore, we are not sure when it stopped exactly, probably in 2001 somewhere. 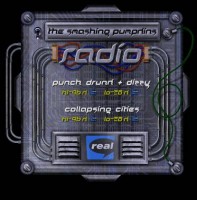