It is still unknown if this is an official cd, for the moment we presume so. This is the info from the eBay auction in 2009:

Late 1990’s compilation of Smashing Pumpkins songs handmade by a Chicago company that had The Smashing Pumpkins as clients for many years. It’s nearly impossible to find information about the existence of this item, it’s so rare. You can find information linking the company to the band, but these were so limited, so rare, and usually SO RUINED by DJs playing songs off of them on the air, that the ones that did exist DON’T anymore.

Down below, you can read a story describing the relationship of the band to the company that made the CD. Basically, it was authorized by the band, but only to be sent out to a FEW select important radio stations in the U.S. Not to be sold in stores to the public. It is filled with an amazing selection of rarities, including import b-sides, deep album cuts, and LIVE SONGS NEVER RELEASED ON ANY PUMPKINS ALBUM!

They cover CHEAP TRICK and Cheap Trick is on stage with them!

The CD has NEVER BEEN PLAYED. It is as minty as the day it arrived at the radio station. This was owned by an employee once all of the music in their format was transferred from CD to computer and compact discs were never played again. Basically, it was an incentive from the company that was making the Pumpkins famous, to say “We respect you as a radio station, and we’re letting you hear these cool rare songs by the band”, but tight formats didn’t allow the broadcasting of unfamiliar album tracks and b-sides, therefore the disc went right into the station’s library.

HERE ARE THE TRACKS:

19. Tonight, Tonight (LIVE same as above)

This CD, again, was handmade by a music promotion company that marketed the Smashing Pumpkins in their career. It has a computer-generated label, says PROMOTIONAL USE ONLY on the rear cover, and has the name of the promotional company associates on the front. You’ll be lucky if you ever see another copy of this while you’re on this planet unless someone decides to make unauthorized copies of it. There are numbers on the inner rim of the CD. We’ve overexposed the photograph on purpose so there won’t be a way for anyone to clearly see it if they’re planning on making a boot of it to sell. Only the buyer will see exactly what this whole baby looks like.

Anyone with questions, or anyone who is a big Smashing Pumpkins collector and wants to talk to another Pumpkins freak about other items that might be in my possession, click the “ask seller a question button”. I have freakishly rare autographed things, early rare items, blah blah blah…

Taken from an internet story of high-powered music world bigwigs:

Jeff McClusky & Associates. Over the course of the last eighteen years, McClusky has made JM&A the largest full-service music promotion and marketing company in the country. Madonna, U2, the Smashing Pumpkins and Alanis have all been McClusky’s clients – before you heard of them. In the last year, Radio and Records Magazine’s Independent Promotion Executive of 1988 started a Film, TV and Soundtrack Advertising division, and entered into a million-dollar pact with Cumulus (owner of 210 radio stations nationwide), which reportedly grants McClusky the power to pitch artists’ songs directly to the company’s top dogs. If you have your musical bases loaded, get yourself a McClusky and he’ll drive you home every time.” 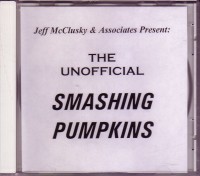 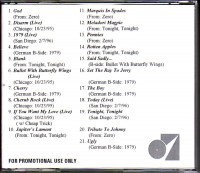 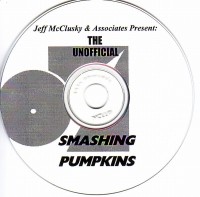