Tracklist for this release was verified using a seller’s impression of the songs upon listening. SPfreaks reviewed the notes and suggest that the cassette is a combination of The Moon (partial) and The Smashing Pumpkins demo cassettes. It is not known where the split from Side A to Side B occurs.

The original seller claims an “unknown song” exists between the tracks Sun (Remix) and She. At this time, it is unknown if this claim is accurate.

Interestingly, the original contributor of this cassette confirms the title, DAT TAPE #1, which is present on the j-card insert, is indeed packaged with the tape (as pictured) titled DAT TAPE #2. This inconsistency presents two possibilities: one, the DAT TAPE #2 is a scribal error and is supposed to read DAT TAPE #1, or two; the package was somehow mishandled and another DAT TAPE #1 cassette also exists.

By taking one step further into making an educated guess regarding the true nature of this release, the omission of the first four songs from the Moon demo on this cassette seems to suggest they could appear at the end of the real DAT TAPE #1 – the one that may or may not exist. Using this theory also suggests DAT TAPE #1 (Side A and part of Side B) would be full of other pre-Virgin material. However, at this time, there is no evidence to support this claim, so the entry will be left as is, until a time we can prove another DAT TAPE was created. 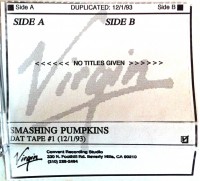