The history of Zeitgeist:

On 20-04-2007 a small but interesting article was published on www.billboard.com. In this article they discuss the new Pumpkins album and mention the tracklist as described above.

Some older working titles are:

Shades Of Doom = 7 Shades Of Black

Some or most (possible) b-sides are known also from a leaked picture of a whiteboard:

From America With Love

16-05-2007: today the artwork for the new release Zeitgeist has been reveiled by the Smashing Pumpkins. See 3rd pic below. Interview about the artwork and the artist is found at http://www.thegauntlet.com/article/1225/8609/.htm.

21-05-2007: today the downloadable version of Tarantula becomes available on iTunes.

04-06-2007: Rumours say Gossamer will be recorded at and officially released as a live track after the Residency Stands shows at The Orange Peel and The Fillmore.

07-06-2007: according to CDJapan.co.jp there is something to expect from the Japanese release of Zeitgeist: “New full-length album from the recently reunited Smashing Pumpkins! Japanese edition includes bonus track “Death From Above.””. The Japanese know how to keep a Smashing Pumpkins tradition alive, as all Japanese album releases so far contained bonus material.

13-06-2007: the CD single of Tarantula will be released as per 02-07-2007, with Death From Above as b-side. In the UK it will be accompagnied by a 7″ colored vinyl (containing the same 2 tracks) and a badge. All this together for a promotional price. The artwork of this release with Paris Hilton on the front cover can be found in our CD’s (Official) section elsewhere.

19-06-2007: some countries, including the Scandinavian and Holland, will be pleased with a 3 track release of Tarantula. Next to Death From Above it will be b-sided with another new track called… Zeitgeist! The downloadable release of Zeitgeist on iTunes has an extra track also: Stellar. iTunes throws also 5 free covers of Pumpkins songs in the basket when the full album is pre-ordered now.

July 2007: Much confusion worldwide amongst fans about all the colors and bonustracks of Zeitgeist. It turns out there are 4 colors for CD’s (red, purple, green and yellow) and 1 color for I-Tunes downloading customers: blue. On different colorvariations the following bonustracks appear: Death From Above, Zeitgeist and Stellar.

All the different Zeitgeist releases can be found on our website. 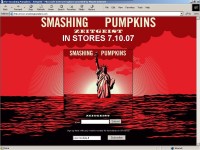 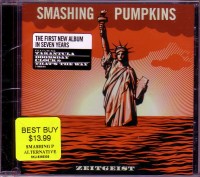 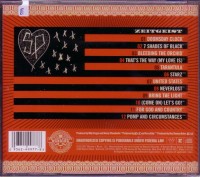