This set of tracks is released by iTunes, labeled “iTunes Essentials” and split up in 4 sections.

Tracks 1-15 are called “The Basics”, with the following info:

“Nothing screams legitimacy quite like selling more than eight million copies of a sometimes difficult but altogether satisfying double album, like the Smashing Pumpkins did with their modern-day masterpiece, Mellon Collie And The Infinite Sadness. Our Basics sift the best from that set along with several of the group’s other masterpieces.”

Tracks 16-31 are called “Next Steps”, with the following info:

“Many people overlook Gish, the Smashing Pumpkins’ not-so-quiet storm of a debut. It’s a shame, really, since that album appropriates Black Sabbath and skyscraper rock as convincingly Nirvana did the Pixies. That’s just the beginning though; later excursions made it into the upper echelons of pensive pop (“Mayonnaise”) and candied guitar exercises (“Muzzle”, “Real Love”).”

Tracks 32-46 are called “Deep Cuts”, with the following info:

“There are 114 songs solely on the Smashing Pumpkins’ Rarities and B-Sides collection. That’s a lot to absorp and appreciate. So we’ve gone through and skimmed the best of the rest, including to-the-marrow demos, one-take live and radio sessions, and a club-ready remix of “1979”.”

All 46 tracks together are called “Complete Set”, with the following info:

“In the scheme of significant movements in music, the Smashing Pumpkins will always be attached to the alternative rock revolution of the ’90’s. Billy Corgan’s artistic vision was much more panoramic than angular riffs and post-adolescent angst, though. Over the course of five albums and countless B-sides and rarities, he indulged the hard-to-pin-down Pumpkins sound in nearly every genre imaginable. As a result, the group has a massive catalog of truly incredible music.”

The songs can also be ordered 1 by 1. Daydream and I’m Going Crazy can only be downloaded as 1 track. Note the misspelling of Mayonaise in the info of “Next Steps”. 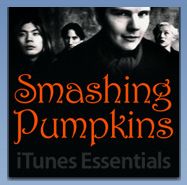