This internet-only release was announced in 2005 with a CD promo called “True Power. True Faith.”, which can be found on our website elsewhere. It includes tracks from the following official Smashing Pumpkins releases:

Some tracks were taken from compilations:

Info from Wikipedia about this release:

“Rarities and B-Sides is an almost complete compilation of all officially released b-sides, outtakes, and demos by The Smashing Pumpkins. According to EMI, this compilation is ‘available as a digital download only and can be found at iTunes or any other digital service provider web-site.’ Most of these tracks can be found on previous b-side/live/demo releases, such as, Pisces Iscariot, Judas 0, The Aeroplane Flies High, and Earphoria. The release is notable however for offering the first digital releases of seven tracks that were previously only available commercially on vinyl.

The songs “Bullet Train To Osaka,” “Terrapin,” “Siamese Dream,” “Purr Snickety,” “Not Worth Asking,” “Honeyspider II” and “Infinite Sadness” were all only available on vinyl until this release. The original “Honeyspider,” as well as, the original single versions of “Tristessa” and “I Am One” were not included on this compilation, because they are owned by Sub Pop Records and not EMI.

Also, “My Dahlia” and “Sun”, the first commercially issued Smashing Pumpkins recordings, were not included in this compilation, probably due to licensing issues. They appeared on the Light Into Dark vinyl only album, which only had a thousand copies pressed back in 1989.

This digital compilation also does not include the 1989 demo Daughter, which was released as a flexi disc single which was only available to Reflex Magazine subscribers.

Additionally, seven official remixes of Smashing Pumpkins songs were excluded from the compilation. These include “Moby Mix” and “Cement Mix” from the 1979 Mixes single and the entire The End Is the Beginning Is the End Remixes single.”

In addition to this Wikipedia info, SPfreaks can tell you quite a few more vinyl and CD rarities were excluded unfortunately: Honeyspider, Jackie Blue, Rudolph the Red-Nosed Reindeer, some rarities from Pisces Iscariot (Frail & Bedazzled, Whir, La Dolly Vita, Spaced), 3 more The End Is The Beginning Is The End remixes (there are 8 instead of 5), Perfect (Electro Breakbeat Dub), Real Love (from Greatest Hits’ bonusdisc Judas O), Untitled single’s b-sides Try, Try, Try (Alternate Version) and Age Of Innocence (Early Version), and Silverfuck from Earphoria.

The complete Rarities and B-sides release clocks in at over 8 hours in length, and is worthwhile getting for the fan that appreciates digital only music for iPod, MP3-player etc. We advise you to check multiple online sources before downloading this release as prices can vary dramatically. 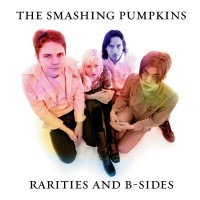